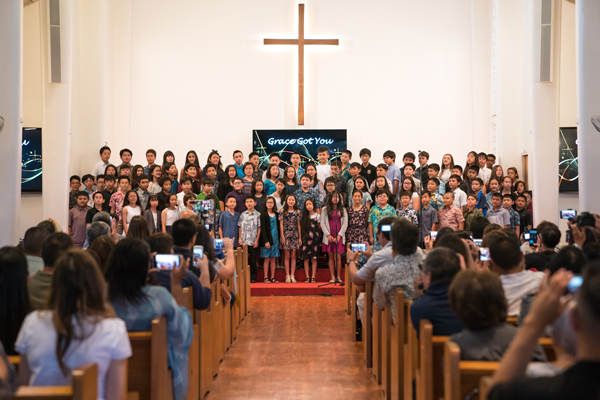 The Class of 2025 bade farewell to the Richard Bento Elementary Campus on May 28 at the Sixth Grade Aloha Celebration.

In her address, Principal Amy Vorderbruegge challenged the students to think about the people who they frequently see, and how they can show Christ's love to them.

"Think about the people you encounter in three minute time frames, like the coffee barista, or the policeman directing traffic at the construction site each morning. Those three minute encounters show others who you really are. ...Jesus wants us to show people who He is by what we do. Will you 'Sing, Glide, Dance, Laugh and Smile for Jesus?' You can do all these things because of God’s grace. You have the opportunity to share God’s grace with others - even three minutes at a time," said Vorderbruegge.

Thirty-three students were recognized as Sons and Daughters of HBA, which means they have attended the school since kindergarten.

Seven students received the President's Awards for Academic Excellence. These students had an A- average or better in fourth and fifth grade, during the first two quarters of sixth grade and scored at least 85 percentile on standardized testing in reading and math. They are Isaac Kahiau Kawai, Joshua Legawa, Samuel Lim, Natali Nomura, Jaden Oki, Ryden Toyama and Xan Waialeale.

Six students were elected by their peers for the following awards: Sara Chang and Kenshin Casamina, Citizenship Award; Selah Hanson and Treyton Birosel, J.O.Y. (Jesus first, Others second, then Yourself) Award; and Amanda Tsuha and Jaden Oki, All Around Awards.

Congratulations to all 91 members of the Class of 2025!