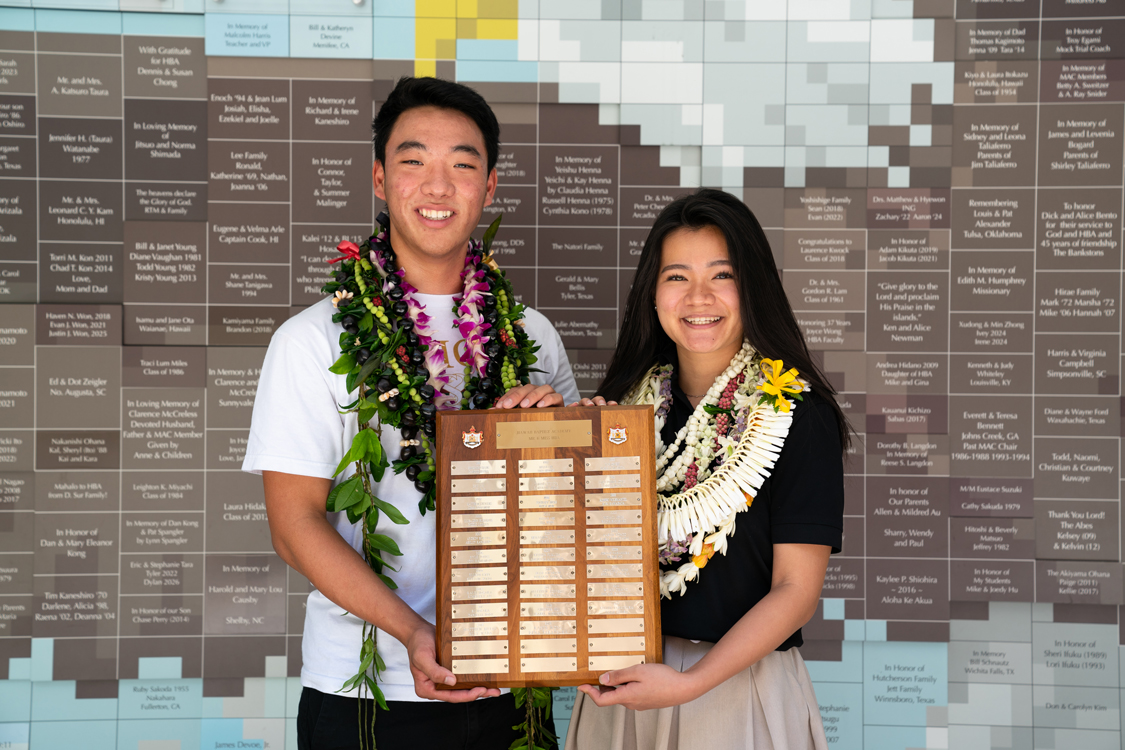 Kasen Wong and Rena Takatsuka were elected Mr. and Miss HBA for the 2018-2019 school year. The award, which began in 1955, recognizes one male and one female senior who typify the best in HBA students, including their contributions to school life through leadership, extracurricular activities and in their character. The winners are elected by their peers.

Wong entered HBA in ninth grade. During his high school career, he participated in the Red Cross Club, Environmental Club, Class Council, Science Olympiad, Math League, Interact Club, National Honor Society (NHS), Japanese National Honor Society, Japanese Club, Ministry Team, and played euphonium in the Symphonic Wind Ensemble. He was a runner for the cross country team and played soccer for the Pac-5 state championship team. Outside of school, he volunteered as an assistant coach for AYSO soccer, served as an assistant at the King Intermediate School Summer Band Enrichment Program, and participated in the Hawaii Youth Symphony. Last summer, he was part of a medical research team at the University of California, Los Angeles, where explored a career in the medical field. This fall, Wong will attend the University of Southern California to study biological sciences. Wong’s mother, Wendy Matsuzaki, is an alumna from the class of 1989.

“I'm so proud of Kasen for taking advantage of all of the opportunities that a small school like HBA offers. During my time at HBA, I didn't get as involved and didn't appreciate the specialness of HBA until Kasen started attending the school. It's nice to be in a place where everybody knows your name and there are so many adults praying for you all of the time. I am proud of all of Kasen's accomplishments, but especially being selected as Mr. HBA because he has had a positive influence and impact on everyone who nominated and voted for him. All the other candidates were very deserving of the honor too, but it shows that Kasen made a difference. Through this honor, I hope he leaves HBA a better place than when he entered. Kasen advocated for the first AP Japanese class ever by collecting signatures to petition HBA, and as a result, the first class opened this school year,” said Matsuzaki.

Takatsuka entered HBA in kindergarten. In high school, she participated in NHS, Class Council, the President’s Aloha Council, played French Horn for the Symphonic Wind Ensemble, and ran for the cross country and track and field teams. As a member of the school’s Ministry Team, she was a student leader at grade level camps and led Bible studies at the middle school. She was also elected student council president her senior year. At church, she taught Sunday School and was a youth mentor.  This fall, Takatsuka will attend Hawaii Pacific University to study nursing. Takatsuka's father, Reid, is a graduate from the class of 1983, and her mother, Claudine (Florenco), is a graduate from the class of 1992. Her brother, Kellen ‘17, was also elected Mr. HBA.

“We are very grateful to the faculty and staff who have taught, loved, nurtured, and prayed over both of our children. We knew that they would be loved by their teachers, but most importantly, we knew they would leave with a good, biblical foundation,” said Claudine Takatsuka.